The Legend of the Almond Blossom

A long long time ago, Al-Gharb (Southern Portugal) was occupied by the Moors and its capital Chelb (now called Silves) was ruled the by powerful Ibn-Almundin.

He was a conqueror of lands and fought many battles. One day amongst the prisoners of one of his battles, he saw and fell in love with Gilda, a beautiful blue-eyed blonde princess from the North. He gave her freedom and their love grew.

Their wedding day in Chelb was celebrated with music, dancing and food for many days and nights.

But some time later, the beautiful princess stopped smiling and fell ill for no apparent reason.

Ibn-Almundin consulted magicians and wise men from all over the world, but none could find a cure for her sadness. Until a poet from a Northern country, also suffering from nostalgia for the snow of his homeland, suggested that the ruler plated almond trees all over his kingdom, then wait for them to bloom…

And so it was that the beautiful princess from the North, woke up one day to see most of the Al-Gharb countryside, covered in fragile white and pink Almond Blossom, resembling the snow of more northerly countries – these spectacular vistas still stun late winter and early spring visitors to Portugal!

From small to large, we offer a range of Algarve family villas just a walk away from beaches or in more rural locations. 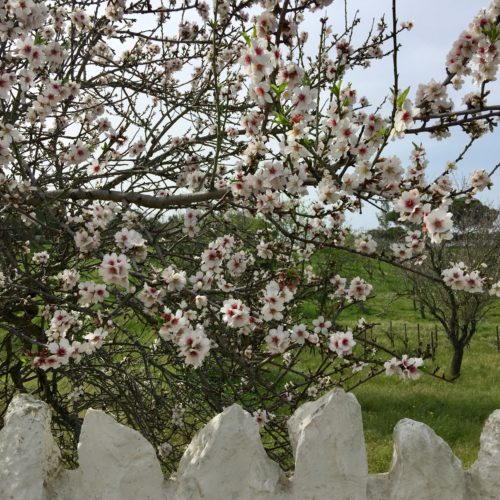 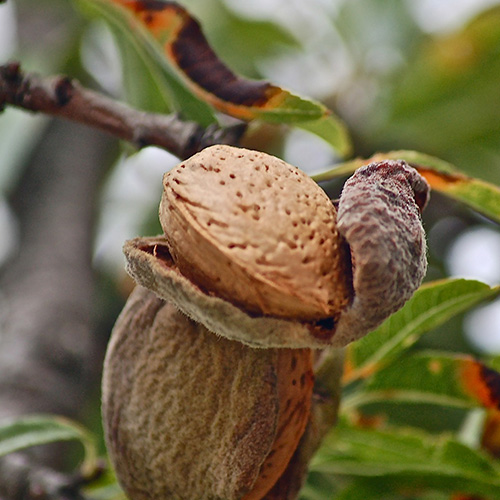 When the petals fall, the almonds grow. Initially coated in a velvety green skin, which eventually hardens and peels off revealing a harder brown shell, they are ready to harvest by late summer.

The traditional way of picking almonds in Portugal is by laying down a big net or sheet on the ground underneath the almond tree and hit the branches with a long pole causing the almonds to fall onto the net.

After collecting them, they then need to be dried out in the sun for a few days before they are ready to be cracked open to separate the edible fruit from the outer shell.

In years gone past whole families typically undertook this fairly laborious process together, with grannies and grandchildren sitting in benches outside their homes cracking the nuts open. In more modern days, a machine is usually used.

Almonds are delicious eaten raw or roasted with a little salt and “piri-piri” (chilli), transformed into the local liqueur “amarginha” and other regional delicacies, or sugar-coated for Easter.

Toss a handful of un-skinned almonds into a frying pan with a little olive oil. Chop-up and add a “piri-piri” (small chilli). Stir-fry gently until the brown skins start to crackle and split. This should take just a few minutes, so be careful not to let them burn. After taking the almonds off the flame, let them rest on a bit of kitchen paper to soak up any excess oil and sprinkle some coarse salt. Serve with a glass of wine and enjoy Casa da Infanta’s 180º views – outdoor meals or sundowners don’t get much better than this! A large family villa accommodating up to 19 guests, this property also has a private pool and is located just a walk away from the beach. 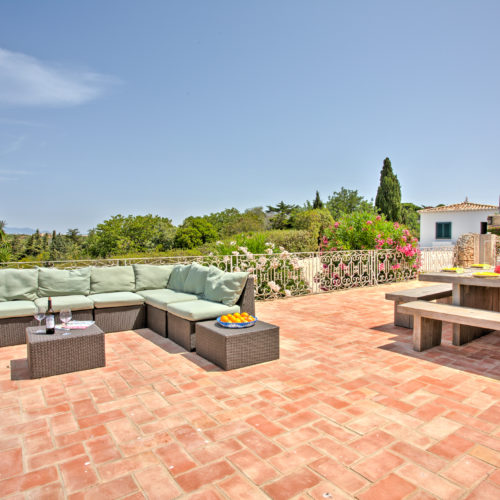 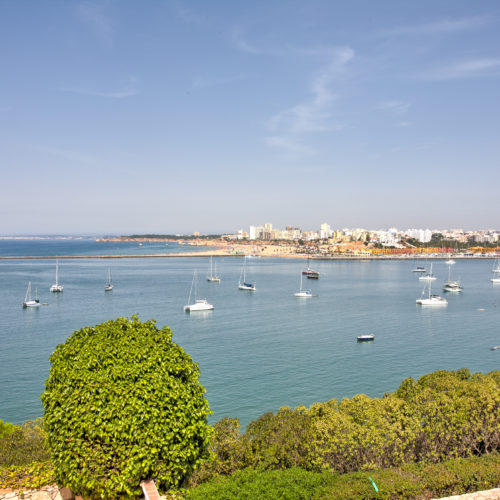 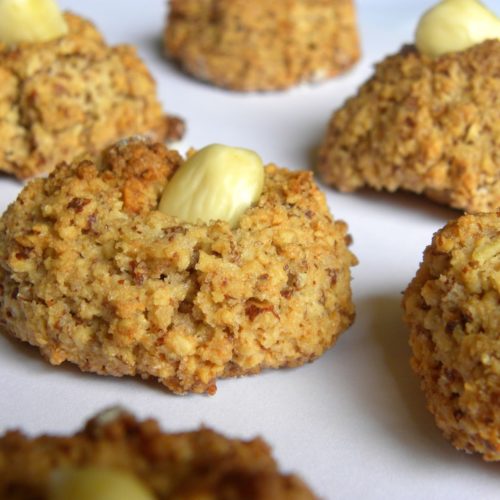 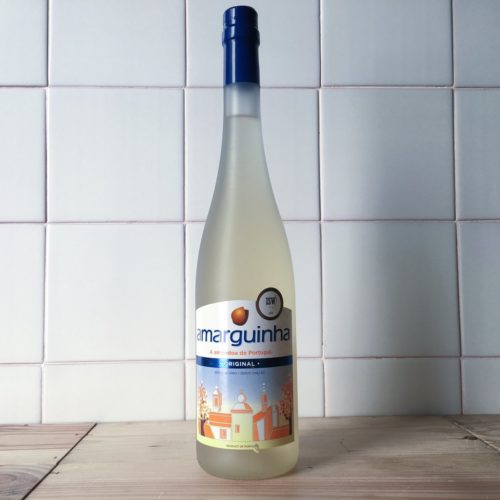 Translated as goose pimples, this regional Algarvian delicacy is made from almond paste moulded into rough shaped cookies with peaks, resembling goose pimples!

To make paste for 20 cookies use 2 egg whites, 260g sugar, 300g almonds and some lemon rind. You will need 20 extra whole peeled almonds, for decorating the cookies.

Grind the almonds coarsely with the skin (don’t allow them to turn into powder). Add the sugar, egg whites and lemon rind, mixing all the ingredients in together. Line a baking tray with parchment paper and line-up spoonfuls of the dough approximately 3 cm apart from each other. Or you can shape small balls of dough with your hand and flatten them slightly. Garnish each cookie with a peeled almond, pressing down a little so that it sticks to the paste.

Bake at a low temperature (150-160° C) on the central shelf of the oven, for 15-20 minutes until the cookies start to go golden (do not overcook them or they will be too dry). Remove the tray from the oven, let it cool slightly and peel off the parchment paper carefully.

An “arrepiado” and an “amarguinha” will taste delicious after the beach at Casa da Praia just sit back and take in the views of yachts and fishing boats peacefully passing by. This charming beach villa for 6 guests also has a private pool.

An “amarguinha” is a traditional almond drink from the Algarve enjoyed as an aperitif or digestive, served plain (but should be chilled), with ice and splash of lemon juice.

“Amendoas confeitadas” are delicate tasting and very pretty, basically consisting of large juicy almonds covered in a crisp sugar coating in pastel colours such as yellow, pink and ivory…

An old tradition of Portugal, they used to be given as a gift at Easter time between godparents and godchildren, much in the same way as chocolate eggs.

The almond confectionery choice these days is wide and includes milk, black and white chocolate-coated almonds, as well as more unusual varieties, such as almonds coated with cinnamon or desiccated coconut.

Set amongst a gently undulating vineyard, the Vineyard Villa is ideal for family holidays up to 12 guests. There is a private pool, and the vast lawn area with a kid’s playground is perfect for an Easter Egg Hunt! 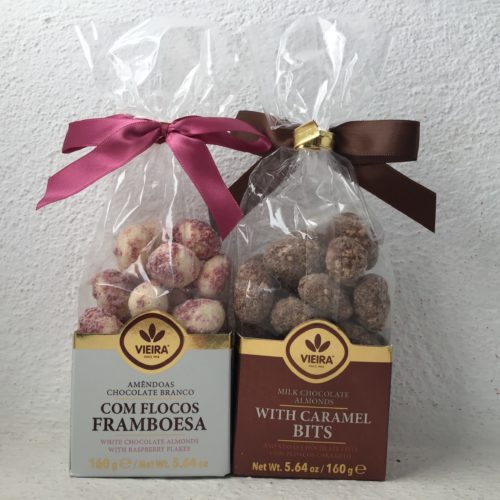 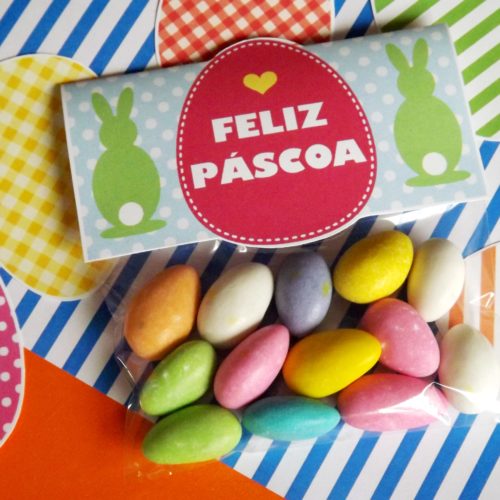 Out & About in Portugal

How to travel to Portugal from your armchair!

Share this ArticleLike this article? Email it to a friend!
Email sent!