It all started with Catherine of Braganza! 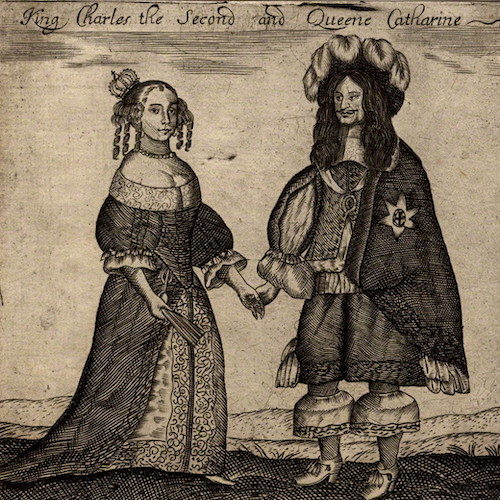 While it’s fairly common knowledge that the Western world has China to thank for the original cultivation of this tannic brew, it’s far less known that it was the Portuguese and in particular, princess Catherine of Braganza in the 17th Century who inspired its popularity with the British who are so famous for loving the brew.

Daughter of Portugal’s King John IV, Catherine had secured the hand of England’s newly restored monarch, King Charles II, with the help of a very large dowry of treasures and money, as well as spices, and the lucrative ports of Tangiers and Bombay.

Portugal had just regained its independence from Spain (it had been occupied between 1580 – 1640) and the political marriage was planned to strengthen the young country.

Part of the nuptial contract was, among other things, that England had to grant Portugal military protection from Spain (and France) if necessary. In return, Catherine would become Queen of England, Scotland, and Ireland.

When Catherine of Braganza travelled from Portugal to England to marry Charles II in 1662, it is said that she took a casket of loose-leaf tea in her trousseau, having grown up drinking it as her preferred everyday beverage. 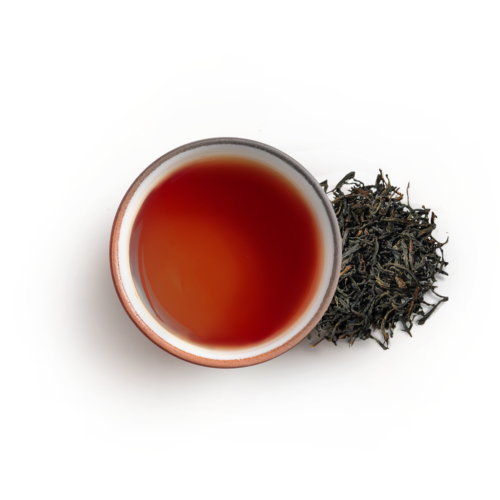 Tea was popular among the aristocracy of Portugal due to the country’s direct trade line to China via its colony in Macau and the Portuguese had been importing tea into Europe from the beginning of the seventeenth century.

In England however, it was only consumed as a medicine, supposed to invigorate the body and keep the spleen free of obstructions. Tea was also very expensive to drink because Britain had no direct trade with China; tea from India wasn’t around yet, and the small quantities that the Dutch were importing were very heavily taxed.

But on introducing it as a pick-me-up part of her daily routine, the young queen made it popular as a social beverage rather than as a health tonic and set the fashion amongst the ladies of the court for this elegant drink. 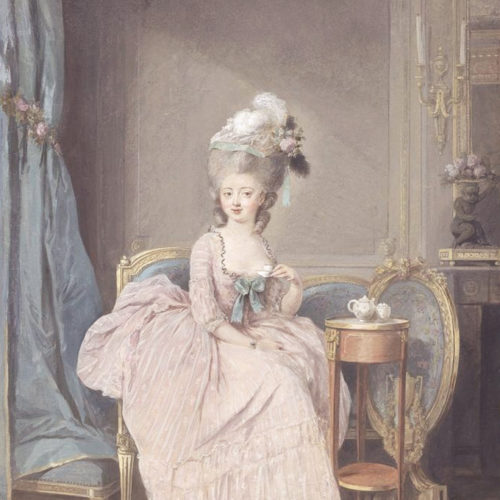 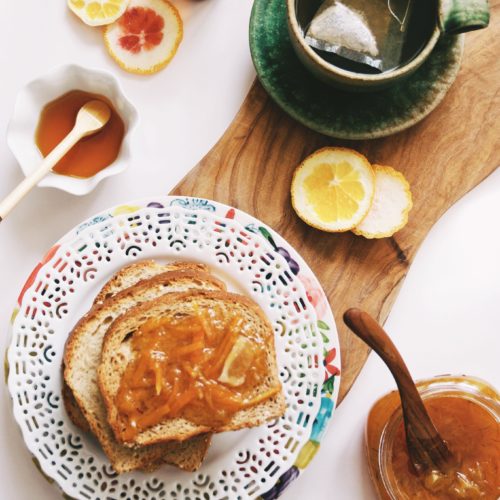 The entire ritual copied from China became an aristocratic habit at the queen’s palaces and associated with fine living. Portugal was also then one of the routes by which porcelain got into Europe, so the pretty imported things that made tea drinking attractive, such as expensive and beautiful porcelain teapots, sugar bowls, cups and saucers, became the must-haves of the day.

Another of Catherine of Braganza’s introductions to her new home was the making of marmalade. As some of the best oranges in the world come from Portugal, Catherine had them shipped over regularly – the ones that didn’t make the journey in top condition were turned into marmalade.

And ode to the queen

So fashionable did the brew became in Britain, that Edmund Waller poet of the era, wrote an ode to the tea drinking Catherine of Braganza:

“The best of Queens, and best of herbs, we owe
To that bold nation, which the way did show
To the fair region where the sun doth rise,
Whose rich productions we so justly prize.”

And gradually, drinking tea also became popular outside the royal circle too and a real following developed country wide. Drinking tea today is not only a daily part of most households in Britain (allegedly 100 million cups daily) but worldwide too, many enjoy this wonderful beverage at any time of the day! 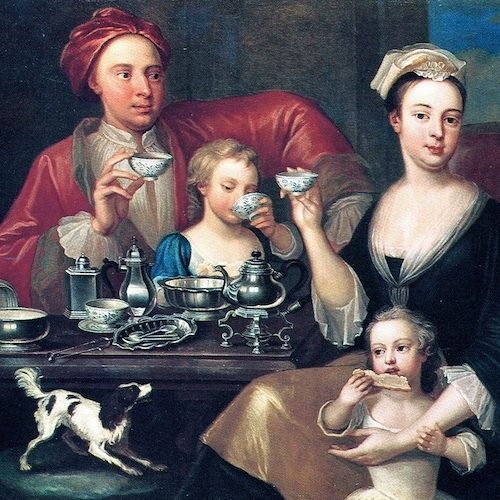 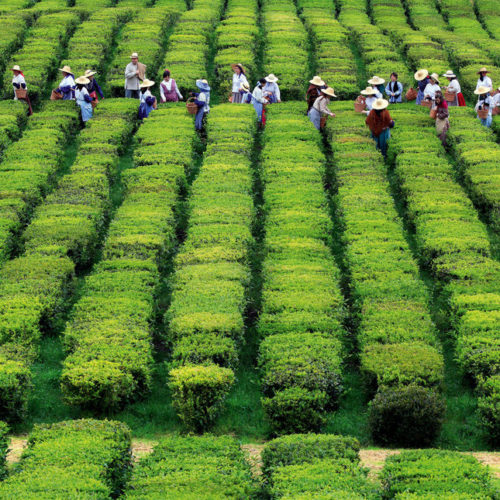 From China to Europe, from Brazil to the Azores

Still to this day, the only tea plantation in Europe is located in the middle of the Atlantic Ocean, 1500 kilometres away from the Portuguese mainland – it has been cultivated in São Miguel Island in the Azores archipelago, since 1883.

Tea was originally introduced to Portuguese priests and merchants in China around the 16th century, who in turn then introduced it to Europe, including Portugal and its colonies of Brazil and Mozambique. The word “chá” in Portuguese originates from the Mandarin word for “harvest”.

At the beginning of the 19th century (around 1820) Azorean-born Jacinto Leite, commander of the Royal Guard of the Portuguese King in Brazil, decided to create the first tea plantation in São Miguel island, using the seeds of Camellia Sinensis he had brought back from Rio de Janeiro.

An important part of São Miguel’s revenue, growing and exporting oranges, was at the time in clear decline, so tea production looked like a promising substitute. And tea would indeed become a central part of the island’s economy, reaching its peak in the 1950s when exportation achieved the staggering amount of 250 tons – impressive numbers for a small island in the middle of the ocean!

However, after World War I, competition with tea grown in Mozambique began causing great difficulties for the Azorean industry. And by 1966, only five of the original 14 processing tea factories remained. 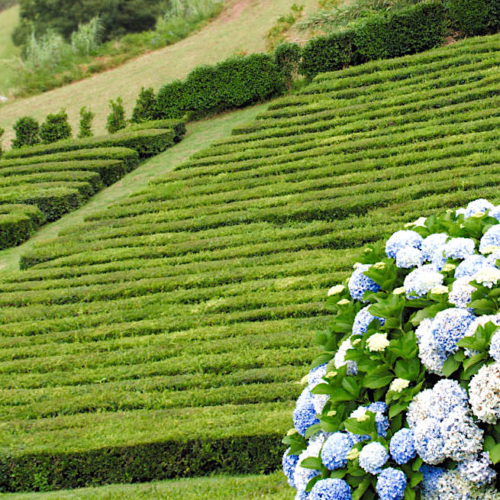 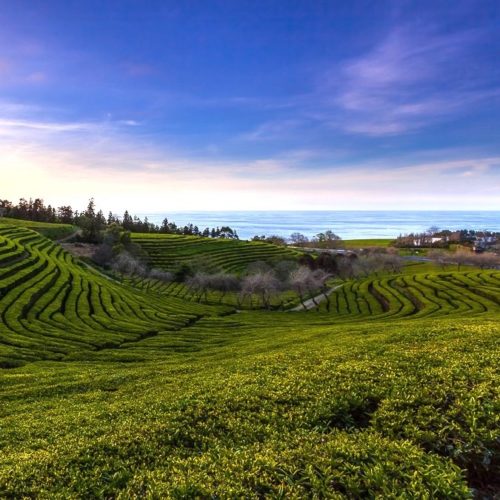 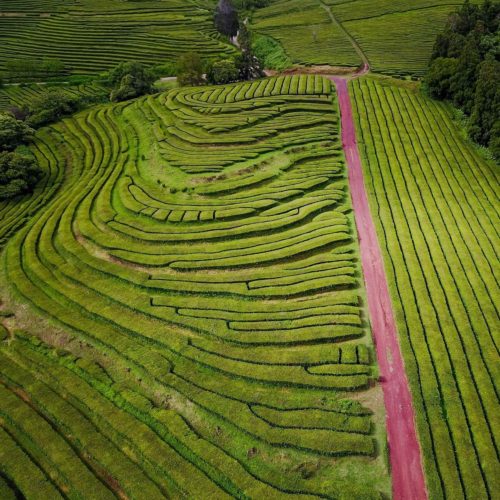 Today there are still two operational factories in São Miguel Island where 100 % organic teas are manually processed to ensure the best leaf treatment possible, and their teas subsequently considered some of the best in the world – the Gorreana Tea Factory and the Porto Formoso Tea Factory

The main production at both factories is “Orange Pekoe” teas, a type of black tea:

Orange Pekoe Tea is the highest quality tea available, extremely aromatic and light. It is made up of the first leaf and terminal bud of the tea plant.

Black Pekoe Tea is made up of the second leaf of the tea plant. It has a less pronounced taste and aroma than an “Orange Pekoe”, but it is more intense in flavour.

Broken Leaf Tea comes from the third leaf of the tea plant and is altogether more subtle in both aroma and taste with very little tannin.

But Green Tea is also produced, as well as other special seasonal mixes worth trying.

And you can take the official hiking trail starting at the Gorreana factory and enjoy the stunning scenery or the tea plantations overlooking the ocean.

We invite you to stay at one of our Azores rental properties and discover more: https://abvillarentals.com/azores/ 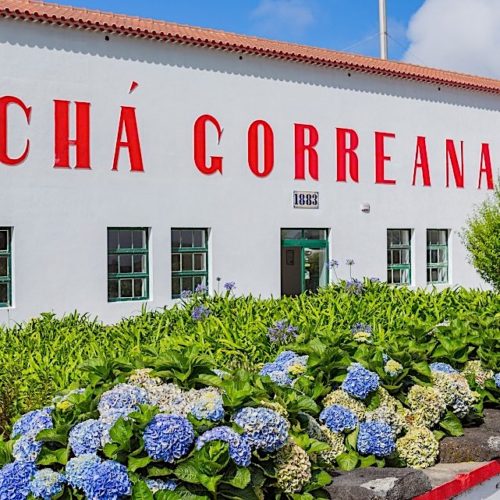 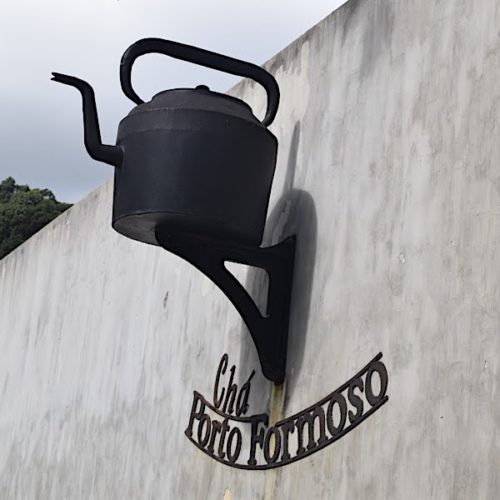