The best 5 things to do in Lisbon!

What you (surely) don’t want to miss on your trip to Lisbon, as recommended by Pats Madeira – author, cultural tour guide and the founder of “Lisbon with Pats”, which offers private tours of Lisbon tailored to the visitor’s interests and preferences.

Pats is an expert on Lisbon and her tours are highly acclaimed for bringing history to life:

The White City, as called by the Swiss director Alain Tanner. Lisbon of the Discoveries, the Tagus river, the Tower and Jerónimos Monastery; Lisbon of the beautiful Azulejos (Glazed Tiles) with hues of blue and white. The traditional Lisbon, Alfama, Fado and the bohemian Bairro Alto. The Picturesque Lisbon, with its typical neighbourhoods and narrow streets and alleys, from Sé to Cais do Sodré. The Elegant Lisbon of the Chiado. The Baroque Lisbon with richly decorated churches and basilicas. The Contemporary Lisbon, from the diverse architecture to the lively cultural life. There’re so many facets to Lisbon that I am sure you’ll be amazed at its diversity and unique beauty.

1. Belém. Centuries of history and a little treat.

Belém is intrinsically linked to Portugal’s Golden Age of Discovery and is the site where navigators set sail to discover the world from the 1400s onwards. It’s an area where you will find the most visited Lisbon attractions: the Jerónimos Monastery, and the Belém Tower (both UNESCO World Heritage Sites), the Monument to the Discoveries and The Coach Museum. The latter being a gem in a worldwide context, as you will be able to see a precious and one-of-a-kind collection of royal ceremonial coaches and carriages, that will immediately transport you to an age long gone by.

Your first stop should be the Jerónimos Monastery (Mosteiro dos Jerónimos), a Manueline masterpiece that will leave you inspired. Nearby is the Belém Tower (Torre de Belém), a symbol of Portugal’s maritime glory. 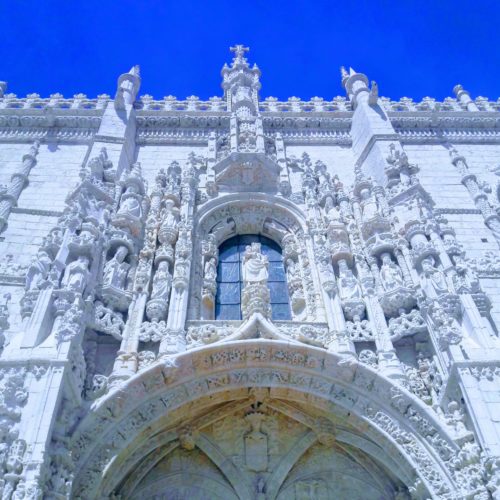 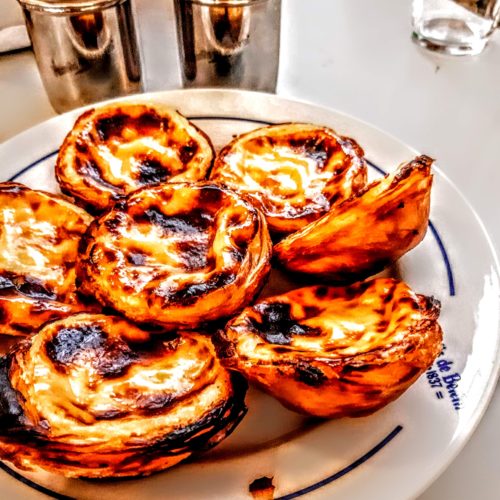 A stroll in Belém gardens and waterfront is mandatory. Enjoy the open sky, the river breeze, the white hues of the buildings, as well as the contemporary Museum of Art, Architecture and Technology (MAAT).

And don’t miss the chance to taste the traditional and divine custard tarts (Pastéis de Belém) at the factory where they are made, just a short walk away. If it’s too crowded, take them with you to the gardens and have your delicious treat outdoors. Blessed be the monks that created them!

2. The Belvederes. These lookout points are the reward after climbing Lisbon’s steep hills.

The only way is up to enjoy the best views! For a quick ride up some of the city’s steepest hills, Lisbon operates a number of bee-yellow funiculars/trams (elevadores), which were originally water-powered.

One of the most charming rides is the Elevador da Bica which creeps up to Rua do Loreto through the Santa Catarina district. At the end of Rua Marechal Saldanha, is the belvedere of Miradouro de Santa Catarina with a few popular outdoor cafés, offering exhilarating views across the river and bridge (Ponte 25 de Abril).

The other belvedere not to be missed is S.Pedro de Alcântara. Built on the 19th century, this Lisbon lookout point has recently been restored to its former glory. Located at the top of the journey of the Elevador da Gloria, near the Bairro Alto quarter, it provides a spectacular perspective over Lisbon’s Eastern side and towards the appealing old quarters of Graça, Saint Vincent Monastery (São Vicente de Fora) and the castle (Castelo de São Jorge). The best views are at the end of the day when Lisbon’s lights are lit, and the slope of the castle is illuminated. 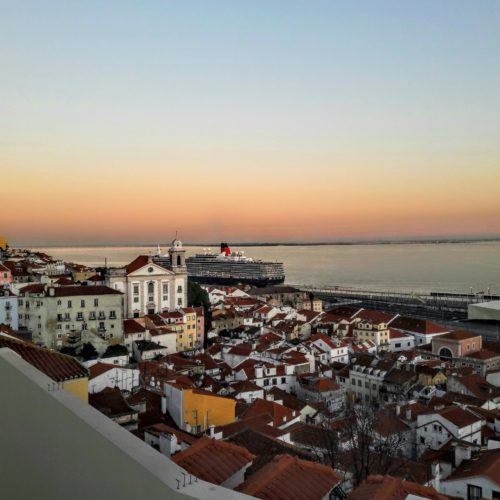 Start your stroll in the Chiado quarter, one of the most elegant parts of the city, with centenary cafés and probably the best shops in town. At the start of the 20th century, the menus of the finest cafés were written in French, as it had ambitions of being “Lisbon’s little Paris”.

Walk down towards Elevador de Santa Justa which connects the higher part of Chiado and Carmo to the lower Baixa streets. Baixa, the next stop, is the best place to admire the distinctive Pombaline architectural style characteristic of Lisbon. Out of curiosity, Pombaline is named after the feared and admired statesman Marquis of Pombal, who was responsible for revamping the city after the devasting earthquake of 1755. 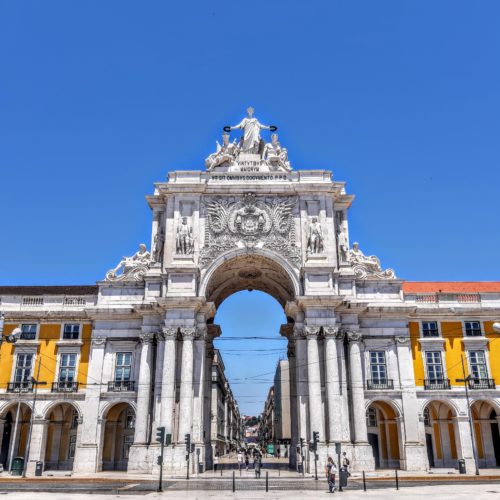 Don’t miss a walk up to the top of the arch over Rua Augusta, from where you can admire stunning views towards the Castelo de São Jorge, the Baixa downtown, Commerce Square (Praça do Comercio), and last but not the least, the Tagus River.

The National Tile Museum, one-of-a-kind in the world, is housed in the 16th-century Convent of Madre de Deus – a rather secluded venue but well worth a visit.

Over the centuries the Portuguese have developed a particular art form of painting ceramic tiles, a mastery known as “Azulejaria” (from “azulejos” – glazed tiles). Here, you can admire a unique collection consisting of some 1,300 tiles, from ancient to contemporary styles. The highlight is located on the third floor – a great Lisbon Panorama wall panel, dating back to early 18th century, depicting the before the 1755 earthquake. 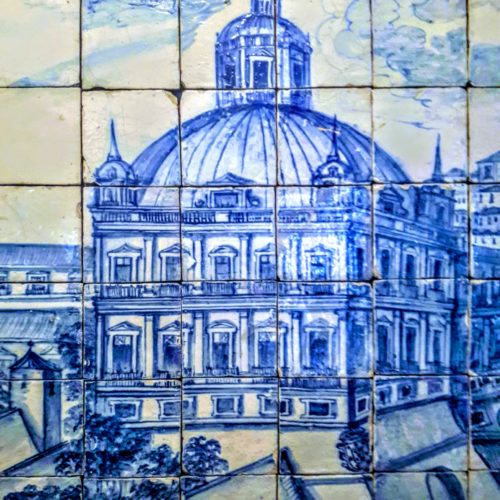 The Gulbenkian Museum houses one of the world’s finest private art collections.
The foundation premises include a large auditorium with a wide selection of music concerts, from classical to contemporary, a space for temporary exhibitions, a congress area with auditoriums and other rooms, as well as the latter mentioned Gulbenkian Museum, the Art Library and a Modern Art Centre.

Don’t miss the chance to visit its beautiful gardens. If you visit at the beginning of August you might get a ticket for one of the “Jazz em Agosto” concerts; a rather quirky jazz festival with worldwide musicians playing live on a beautiful outdoor amphitheatre.

For a more in-depth or detailed visit, “Lisbon with Pats” can help you plan and maximize your time so that you enjoy a memorable experience of Portugal’s capital city.

Check-out our holiday rentals on the Lisbon Coast. 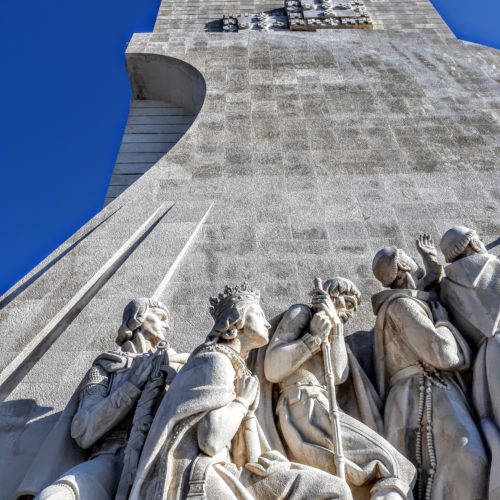